The Union of European Federalists (UEF) welcomes the fact that after four days of very tough negotiations, national governments in the European Council have agreed on measures to launch the new Fund proposed by the European Commission, Next Generation EU. 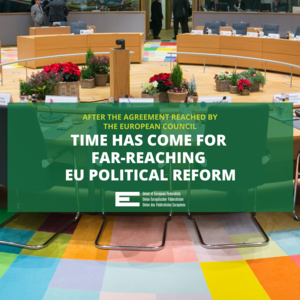 "The Fund maintains its ambitious scope, with innovative financing through common debt and a dimension capable of providing concrete responses to this very serious crisis, strongly orienting the recovery towards the plan for the ecological transformation of the economy; the crucial issue of own resources is now also on the table, though as UEF we urge for a clearer and tighter calendar to implement them.” Sandro Gozi, President of the UEF and Member of the European Parliament, stresses. "However, there are some shadows in this agreement that need to be highlighted. The Multiannual Financial Framework has been significantly scaled down compared to the indications of the European Parliament and the Commission's proposals, especially for the cut in the programmes for health, research, external action and migration policy, all strategic policies sacrificed on the altar of the "rigour" of "frugal" countries. Instead, they maintain the privilege of their "rebates", so dear to Margaret Thatcher, which is an indicative practice of the intergovernmental and selfish approach that characterizes them. We rely now on the EP to strengthen the agreement on MFF in order to ensure that EU can act effectively in the long run, beyond the urgency of the crisis.  Finally, the softening of conditionality on the rule of law is a partial vulnus that should be noted. Here we urge the Commission and the German Presidency to present and discuss very quickly a specific and effective proposal".

"The real knot," continues Sandro Gozi, "is that the critical issues that emerged in the negotiations are yet another demonstration that the decision-making system on which the European Union is based is totally inadequate. If the EU wants to be a community of destiny and if it wants to have an authoritative presence in the world, it cannot remain a prisoner of intergovernmental mechanisms that try to reduce it to a sum of nation states. Until the EU is endowed with fiscal autonomy and the possibility to take action directly, both the right of veto of each member state and the priority for each government to negotiate in the name of the interest of its own country before the common one will never be eliminated, de facto before de jure".

"The time has come, therefore, to reopen the construction site of the Treaties and to strongly support the political-institutional reforms that will allow, first of all, to endow the European Union with fiscal competence, and to start the path towards political union through a far-reaching reform of the European Union, without being stopped by those who have not yet matured the new vision of Europe, but focusing in this direction the Conference on the future of Europe that we hope can begin as soon as possible".

The Union of European Federalists (UEF) is a pan-European, non-governmental political organisation dedicated to the promotion of European political unity. For more than 70 years UEF has been a leading voice in the promotion of European unity and an early campaigner for key milestones in the development of the European Communities and then the European Union. With 25 national sections and over 400 local groups across Europe, UEF promotes a federal Europe among citizens and political representatives at all levels of government. More on: www.federalists.eu