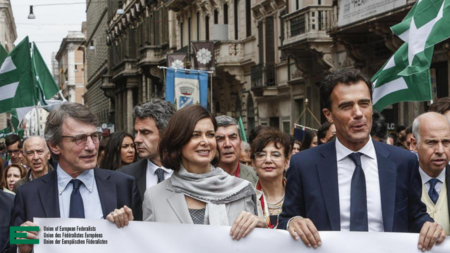 Born in Florence on 30 May 1956, SASSOLI studied political science before starting work as a newspaper and news agency journalist.

The father of two began working for national broadcaster RAI in 1992, rising through the ranks to become a familiar face for millions of Italians, presenting the evening news on the main channel, of which he also became deputy-director.

Mr. SASSOLI, a member of Italy’s center-left Democratic Party, has been a member of the EP since 2009. He was elected vice president five years later and has led the body since 2019.

As Parliament President, SASSOLI was a largely conciliatory voice, working to help advance the agenda of von der Leyen, the Commission’s first woman President, including the European Green Deal, the ambitious package of measures to combat climate change.

During his mandate SASSOLI called for a new  “political pact” with other institutions to give shape and content to the request of a new Europe, improving the Spitzenkandidat process, enhancing the Parliament’s voice and powers and enacting reforms and treaty revision to strengthen European democracy.

“We want the Conference on the Future of Europe (CoFoE) to open up a new phase, a phase of participation, but also of change. To change the rules, because we have seen in this year and a half that there cannot be taboos. European democracy must be more efficient and effective. The European Parliament is very ambitious on this.”, said the EP President SASSOLI at the European Youth Event in the framework of the CoFoE.

As a committed European, he always believed that our future lies in a democratic and sovereign Europe, and pushed for a new European democratic transformation.

In 2020, Sandro GOZI, MEP for Renew Europe and President of the Union of European Federalist (UEF), handed over the nearly 1,200 signatures of the '1,000 x Federal Europe' campaign to David SASSOLI. With President SASSOLI, we shared the need and urgency to provide the Union with new genuine own resources for the European revival.

That same year, the UEF sent an open letter to MEPs calling on the EP to propose the required amendment to the Treaties and asking the other EU institutions to commence the related process of treaty revision. The EP President thanked UEF for the commitment to the European project, he stressed on the need to have a successful CoFoE and on the key role that the Parliament, Civil Society and European Youth has on it.

“UEF is deeply saddened by the terrible loss of a great European and an outstanding President of the European Parliament. He has been a member of the Movimiento Federalista Europeo in Rome, since Mr. SASSOLI was a convinced federalist, a champion of European democracy, values and integration. We commend his efforts to build a strong house of European democracy, and express our sincere condolences to his family, friends, and colleagues. Riposa in pace.”, said UEF President and MEP Sandro GOZI.