Ten years after the first European social forum in 2002 more than 4 thousand participants, 300 networks and organisations from 28 countries from all over Europe and beyond, met at Fortezza da Basso in Florence from 8th to 11th, November to debate and strategise together for another Europe. 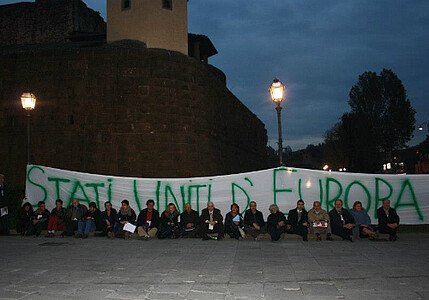 Over 100 meetings, and many new networks, campaigns and ECI were launched. A call for common action emerged from the convergences built around the following issues: democracy, austerity and debt, natural and social commons, social and labour rights, global justice and peace.

The first unifying initiative towards a European-wide convergence was the General strikes and mobilisations against austerity in many countries in Europe on the 14  November 2012. A second one is a common day of action on the occasion of the EU Spring Summit, which will take place in Brussels on 23 March 2012.

The second one regarded the organization of the assembly “Refounding Europe: A democratic assembly towards a Citizens pact”. It was co-promoted by MFE, European Alternatives, ATTAC Austria, Global Project, European Movement and Altramente.

The aim of the assembly was the construction of a Europe based on real democratic and political processes, able to interrupt the hegemony of austerity and reformulate the response to the crisis and open another road to Europe through a Citizen Pact - a real pact of European citizens and residents leading to substantial reforms of the decision-making processes and institutions of the European Union.

Moreover inside the Fortezza da Basso JEF Italy organized a stall with federalist leaflets and books. Signatures were collected to federalist appeals and two banners were hung outside and inside the Forum area reclaiming “United States of Europe” and “European federation now”.

The federalist participation in the Florence 10+10 was a success. Several organizations and networks have been directly contacted for further collaborations and the federalist proposals have been spread in several seminars and workshops finding many positive reactions but also some strong opponents.

No immediate action has been taken inside the democracy convergence area. There was a broad consensus to promote a constituent process from below without, at the moment, any constructive confrontation with the European institutions. This was the limit of Florence forum: the hope in the following months this attitude could change in order to build a common campaign for European democracy before next European elections. More in www.firenze1010.eu.