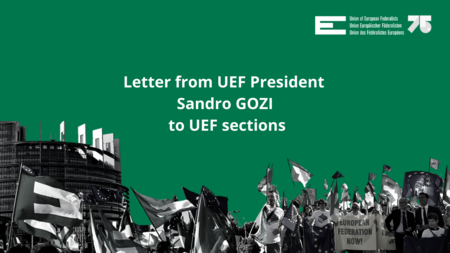 As the Conference on the Future of Europe progresses towards the drafting of concrete recommendations, the latest developments witness the awakening of a stronger pro-European sentiment in various Member States that politically strengthen the work of the Conference itself.

The Quirinale Treaty celebrated and institutionalised the commonality of positions and future cooperation between two founding members: Italy and France. This agreement represents the basis for a stronger support towards the reform of the current institutional framework, the revision of outdated budgetary rules in the light of the completion of EMU and the promotion of a European identity and of a true European strategic autonomy.

Stronger synergies between these two countries will be complemented by the dawn of a new political era in Germany. The coalition deal recently concluded states that a democratic and strategically sovereign European Union, capable of acting in the international scene, is the basis for peace, prosperity and freedom. For this reason, the new Government supports the Conference on the future of Europe in order to carry out the necessary Treaty reforms, and claims that it should lead to a constitutional convention and to the further development into a European federal state (Bundesstaat), organised in a decentralised manner, in accordance with the principles of subsidiarity and proportionality and based on the Charter of Fundamental Rights basis.

In this promising framework, inside the Plenary of the Conference, the Working Group Democracy of the Conference on the Future of Europe experienced an excellent start thanks to a very ambitious agenda that aims to lead to concrete proposals for political and institutional reforms on the crucial issues of strengthening European democracy. UEF managed to gain its own place as an equal member, to European and national policymaker, and set up a constructive and frank cooperation with Chairman Manfred Weber. Thanks to the involvement of our Secretary General Secretary Anna Echterhoff, of the undersigned, and of our Vicepresident, Domenec Devesa, we can seize this historical opportunity to steer the discussion on the reform of the Union towards the creation of a democratic federal entity, closer to citizens and capable to ensure the protection and promotion of our values.

The time to act is now. We must boost our efforts to raise awareness about this positive momentum, with a view to engage citizens directly, and to gain wider support for our ideas, projects, and proposals. therefore wish to call upon you to crowd the squares of your cities and towns, to organise conferences and workshops in schools, universities, and inside your sections. I invite you also to refer to our ideas published on the Conference platform, which also include the European appeal with our demands launched at the start of the Conference that you can support and disseminate using this link:
https://futureu.europa.eu/processes/Democracy/f/6/proposals/118702.

The future of Europe is in your hands, and we must live up to this challenge to make sure the Union of tomorrow will be modelled on the ideas of our founders Spinelli, Schuman, Adenauer.

I would like to thank you in advance for your invaluable contribution and support.