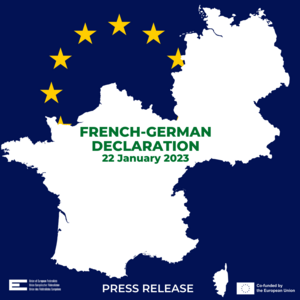 In a document published this weekend, both countries agreed to break the impasses the European Union is in.

The Union of European Federalists (UEF) welcomes the joint declaration between France and Germany on Sunday 22 January and emphasises the commitment of the two countries to reform the European institutions, including the possibility of Treaty revision, in order to strengthen the European Union as a geopolitical actor and prepare it for future enlargements.

In the short term, France and Germany, in order to break the impasses that have been experienced, agree to extend the areas in which qualified majority voting takes place in the Council, for example in certain areas of the Common Foreign and Security Policy and taxation. Moreover, in order to strengthen public participation and support for the European democratic model, they are in favour of the renewal of European electoral law, including the creation of a single European-wide constituency with transnational lists, as well as the development of new ways of involving citizens in European policy discussions, building on the experience of the Conference on the Future of Europe (CoFoE).

“The European federalists greet this declaration with satisfaction”, states Sandro Gozi, President of the UEF and MEP of Renew Europe. “The shift to majority voting in the Council, particularly on those matters mentioned in the declaration, the new electoral law with the transnational lists, together with the declaration in favour of opening up the revision of the Treaties, these are all steps in the direction that we federalists advocate, and which also correspond to the demands contained in the conclusions of the Conference on the Future of Europe.”

“We now call on the other member states, and notably Sweden, which currently holds the European Union's rotating presidency, to prepare the necessary steps to bring the request of the European Parliament and the CoFoE citizens to the European Council to convene a Convention for the reform of the Treaties,” concludes Sando Gozi.