With this nomination, members of the Executive Board of the parliamentary intergroup signal a closer collaboration with the UEF 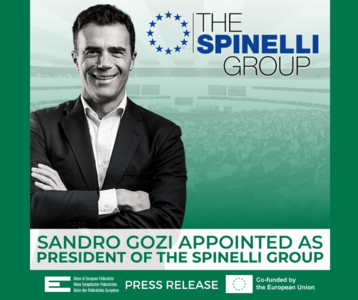 This nomination is a clear sign that the Board of the Spinelli Group is seeking greater collaboration with the Union of European Federalists (UEF), of which Sandro Gozi is President. Both structures will need to collaborate tightly to promote their call for a Convention that would draft new European Treaties.

The revision of the European Treaty has been a long-standing demand of the UEF. In June this year, the European Parliament voted on a resolution to call for the establishment of a Convention to draft new treaties, at the initiative of the Spinelli Group.

As Sandro Gozi takes over the rotating presidency of the Spinelli Group from Daniel Freund MEP, the UEF stands beside his leadership and ensures him the support of all federalists. The UEF warmly thanks Daniel Freund for his chairmanship.