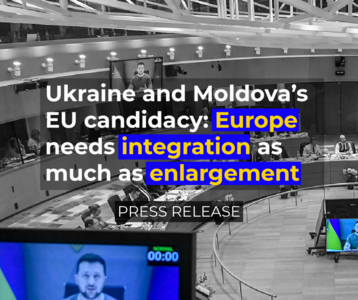 As European leaders met in Brussels on 23 and 24 July in Brussels to discuss the war in Ukraine, the Membership applications of Ukraine, Moldova, and Georgia, and the follow-up of the Conference on the Future of Europe (CoFoE), the Union of European Federalists (UEF) calls on the head of states and of governments for immediate action to empower Europe.

The UEF welcomes the candidacy of Ukraine and Moldova to the EU. The decision of European leaders to grant candidate status to these two Eastern-European countries is a historic decision that will shape the destiny of our European community.

The revision of the treaty will allow for important reforms in our Union. In particular, the UEF advocates for:

Sandro Gozi, President of the UEF said: “On the 9th of May, the three institutions undertook a solemn engagement to translate the proposals made in the context of the Conference into concrete actions. While it is true that much can be done within the framework of the existing Treaties, a deeper reform of the EU is needed. The recent crisis highlight the need to create new competencies in the areas of health, energy, and foreign policy to avoid repeating our past mistakes. The European Parliament lived up to this promise by triggering the treaty revision procedure. Now, the Council needs to show the same degree of ambition as soon as possible, without taboos nor totem!”

Two weeks ago, a vote of the European Parliament endorsed the results of the CoFoE and called on the Council to initiate the process of revising the EU Treaties.

We take not of today’s position of the European leaders and hope that the results of the CoFoE will be discussed soon. The deepening of our institutions cannot wait. It is the only way for Europe to answer the present energetic, economic, social, and geopolitical crisis.

The European federalists will continue to advocate in favor of the recommendations of the CoFoE and for the convening of a Convention on the Reform of the Treaties, at both national and European levels.