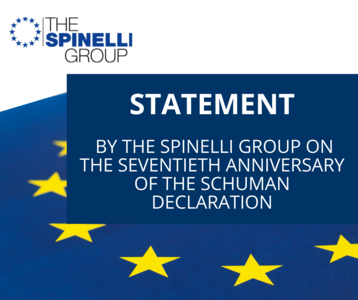 1. 70 years ago, Robert Schuman and Jean Monnet gave birth to what was to become the European Union. Their proposal, to unite the coal and steel industries of France and Germany, was radical. Their timing was right. Their method was clever. Their project was deliverable. And their mission was federal.

“In this way, there will be realised simply and speedily that fusion of interest which is indispensable to the establishment of a common economic system. It may be the leaven from which may grow a wider and deeper community between countries long opposed to one another by bloody divisions.

“By pooling basic production and by instituting a new High Authority, whose decisions will bind France, Germany and other member countries, this proposal will lead to the realisation of the first concrete foundation of a European federation indispensable to the preservation of peace.”

2. Schuman warned that “Europe will not be made all at once, or according to a single plan. It will be built through concrete achievements which first create a de facto solidarity”. As Monnet advised, only supranational governance would make a reality of the spirit of solidarity between the six member states and their citizens.

3. Over the years, Monnet’s method has evolved, new institutions have developed and many more states have joined the Union. But while the EU’s achievements must not be underestimated, it has struggled to maintain the pace of integration and live up to the ambitions of its founding fathers. Too many European politicians are lured back into nationalism, and some member states even question the rule of EU law. In these circumstances, it has proved impossible for the Union to realise its full potential.

4. Today, the coronavirus pandemic is leading to huge social and economic problems, aggravating financial instability, regional imbalances and political divisions, exposing the constitutional frailty of the Union. In the challenging international environment, European integration needs fresh impetus consistent with the spirit of the Schuman Declaration.

CONFERENCE ON THE FUTURE OF EUROPE

5. It is agreed in principle to convene a major Conference on the Future of Europe involving the representative institutions, consultative bodies, civil society organisations and citizens. We hope that this can be convened in September 2020. We urge that discussions are accelerated between the three institutions on the preparation and organisation of the Conference on the basis of the proposal made by the European Parliament. We call on the European Council speedily to define its position – but its failure to do so should not prevent the Conference from beginning its work.

7. The Conference agenda must include both a critical assessment of the balance of competences between the EU and member states as well as a thorough reconsideration of the balance of powers between the institutions. Some of the reform proposals can be achieved within the existing compass of the Treaty of Lisbon; others will lead to treaty change.

THE BALANCE OF COMPETENCES

8. The Union needs to be competent to address effectively all those issues which now outstrip the capability of its member states to resolve alone. The federalist principle of subsidiarity needs to be applied fully across the spectrum of both internal and external policy. The goal should be to build a vibrant liberal democracy, a fair and resilient European society, and a sustainable economy.

9. The Union cannot afford to be permanently divided between net contributors and beneficiaries to the budget. This requires the federal element of the budget – ‘genuine own resources’ – to be progressively expanded as a proportion of the whole. The EU should use its greater fiscal capacity to invest in public goods of common value to all its citizens, including education, scientific research, new technology, cybersecurity and the European Green Deal.

10. The share-out of competences between the member states and the Union level of government should be reviewed especially in the fields of public health, energy supply, and asylum and immigration. Supervision of the European financial services industry should be strengthened at the federal level. The single market needs consolidation in the areas of services and taxation policy.

THE BALANCE OF POWERS

11. Enhancing the competence of the Union requires strengthening its governance. Executive authority needs to be concentrated on a streamlined Commission, made fully accountable to the bicameral legislature of Parliament and Council.

12. Reliance on unanimity in the Council must be replaced by greater use of majority voting, particularly in fiscal and social policies. Where necessary, there must be enhanced cooperation among a group of integration-minded member states. The European Parliament must gain the right of co-decision with the Council over the raising of revenue.

13. Reform is needed, in time for the 2024 elections, to ensure that a portion of MEPs is elected in a pan-EU constituency from transnational lists, contested by federal political parties.

14. The Conference on the Future of Europe is the chance to relaunch the process of European unification along the federal lines first envisaged in the Schuman Declaration. 21st century Europeans deserve to live in a well-governed, adequately resourced and united democratic polity. And the world needs a strong European Union that projects abroad the values and principles which it upholds at home.

15. The Spinelli Group stands ready to elaborate its proposals for a European federation as its contribution to the work of the Conference.

Download here the Statement by The Spinelli Group on the Seventieth anniversary of the Schuman Declaration.