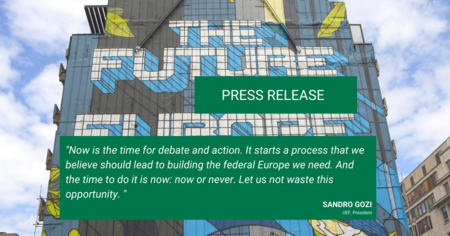 Today the European Parliament gave the green light to the Conference on the Future of Europe. The UEF welcomes the reaching of an agreement that finally opens the opportunity to work for a new Europe together with the citizens. For the forces that believe in a federal, sovereign and democratic Europe, this is the time for commitment and mobilisation.

Welcoming with relief the long-awaited launch of the Conference on the Future of Europe, the UEF underlines the importance of the historical moment and the political challenges that the European Union is facing and recalls the need for the Conference to be a moment of confrontation to bring together citizens, leading exponents, NGOs, trade unions, and representatives of national and European institutions, to debate and decide how to go about adapting our institutions in a way that will complete the building of a federal, sovereign and democratic Europe.

"At watershed moments in history, communities, to avoid sliding into an irreversible decline, need to be able to adapt their institutions, equipping them to govern new circumstances" says Sandro Gozi, President of UEF and MEP. "This is what we need to do today in the European Union: making the Next Generation EU facility permanent and creating a federal budget, so that the EU can share fiscal sovereignty with the Member States; and acquiring new competences, also through extending the ordinary legislative procedure, in the field of health, economic policy, foreign policy and defence, to make Europe a global leader in the defence of fundamental values and the rule of law, a model for a socially sustainable ecological transition and a global player for a new multilateralism".

"This is why the Conference must be able to discuss without taboos not only which European policies need to be strengthened, but also which treaty reforms are needed to equip the EU with the necessary tools to act effectively and incisively", continues Domenec Ruiz Devesa, UEF Vice-President and MEP.

"In this regard, the reform of the European electoral system will also be fundamental, in order to uniform it, to create pan-European constituencies with transnational lists, starting the birth of a real European political space and public debate", concludes Sandro Gozi. "Now is the time for debate and action, also to overcome the limits of the Conference's governance, which the Council wanted to weaken with the principle of consensus to reach conclusions. We need a common front of all the forces that believe in a sovereign and democratic Europe, in the European Parliament, in national parliaments and governments, in civil society. It starts a process that we believe should lead to building the federal Europe we need. And the time to do it is now: now or never. Let us not waste this opportunity".