As you may already know, UEF is implementing its project “#makeEuropeBloom: the Time is Now!” not only as a way to accompany and raise awareness of the Conference on the Future of Europe (CoFoE), but also to contribute to building the New European Bauhaus.

Officially launched on Europe Day this year, #makeEuropeBloom consists primarily of painting murals at different peripheral European locations. Today, we are happy to share with you the video of the making of and the final results of our first artwork in cooperation with Marest Studio, Generalitat Valenciana and Ajuntament de València in the city of Valencia (Spain), which was painted in parallel to UEF’s XXVII European Congress.

Do not hesitate to share and leave your comments below the video!

UEF took on from the very beginning the fourfold challenge to make the European institutions commit to launch the Conference on the Future of Europe (which finally happened on 9 May, Europe Day); to ensure the institutional commitment to study with respect and attention the transformative proposals of European citizens and civil society; to advocate for this Conference to represent a real opportunity for the reform of the Treaties and the European institutions; and, finally, to involve and inform as much as possible the European citizens on this first major pan-European democratic exercise.

As a response to a call for proposals by the Directorate-General for Communication (DG COMM) of the European Parliament, “#makeEuropeBloom: the Time is Now!” is an ambitious and audacious artistic project. “It is no coincidence that the time slot during which the project is being implemented matches the time span of the CoFoE. The aim of our project is to directly address European citizens in their living environment. Its very nature strives to actively accompany the CoFoE by helping to convince citizens to express themselves in this pan-European democratic process and bring forward the reformations that citizens are demanding towards a more democratic and sovereign Europe”, says Sandro GOZI, UEF President.

In addition, #makeEuropeBloom has also been devised as a response to the invitation “to set up a New European Bauhaus”, that Ursula von der Leyen, the President of the European Commission, launched in her State of the Union Address of 16 September 2020. “I want NextGenerationEU to kickstart a European renovation wave and make our Union a leader in the circular economy. But this is not just an environmental or economic project: it needs to be a new cultural project for Europe. Every movement has its own look and feel. And we need to give our systemic change its own distinct aesthetic – to match style with sustainability. This is why we will set up a new European Bauhaus – a co-creation space where architects, artists, students, engineers, designers work together to make that happen”.

Arts to illuminate the European project

“UEF, combining arts and politics, strives with this project to remind all the peoples of Europe that the European integration project aims to develop their common living space and help them realise that their exchanges go far beyond the cold economic sphere, as a follow-up of the long lasting European common civilisation, by leaning on the citizens’ hearts, minds, senses and artistic sensibilities”, explains François MENNERAT, UEF Executive Board member and legal representative of the project.

A hand out to “lay” citizens

“We aim to reach out to those persons who appear to be persistently far away from the European perspective and from the debates triggered around the future of Europe”, states GOZI. Thus, this project targets, not the big capitals or the privileged quarters of urban centres, but rather deprived or peripheral areas that are still away from the European conversations. It seeks to involve those who live there, starting with the preparation of the events, in full co-operation with the local authorities and the elected representatives.

To reach its goal, UEF distributed ahead of our presence in Valencia an online survey, in which organisations of all kinds, from political parties, trade unions, neighbourhood councils to individual citizens contributed with their ideas and responses on the symbols, shapes and colours that could best capture their feelings and emotions about European democracy, which was the central theme of the pictorial work, and the future of Europe.

“With this mural, which will have a duration of at least seven years, not only has it been possible to create an innovative language by and for the EU from a contemporary and urban perspective, but it has also led to a reflection widely shared by ordinary citizens and sectors linked to education, tourism, culture, industry and think tanks on the EU and its institutions. This is how we believe we have set an example on how the future of Europe should be built”, states Alejandra ALMARCHA, UEF Secretariat Director.

The inauguration of our mural in Valencia was attended by neighbours of La Plata, an area between the sophisticated City of the Arts and Sciences of Valencia and a modest working-class neighbourhood, as well as UEF President & MEP Sandro GOZI, urban artist Antonyo MAREST, UEF Vice-President & MEP Domènec RUIZ DEVESA, Vice-President Luisa TRUMELLINI, Secretary-General Anna ECHTERHOFF and contemporary art curator Fran PICAZO.

Among all the remarkable speeches pronounced on that day, we would like to recall the Conference Co-Chair VERHOFSTADT’s encouraging words: “The EU is more than a single market or a political Union, we share a common European culture. This kind of project must become Europe’s trademark. And I am convinced that the most innovative proposals to come out of the Conference will be those on how to boost European humanism, thought, art and lifestyle. [...] Let’s spread our way of living and thinking through art in the framework of the CoFoE!”.

You can also share your ideas and feelings on the Valencia mural in the CoFoE digital platform, within the European democracy section.

Click here to stay tuned on #makeEuropeBloom. New locations will be unveiled soon! 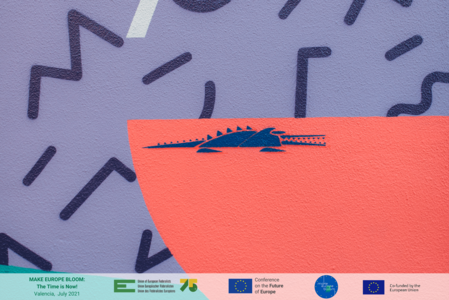