International » Dachverband: UEF » THE TIME IS NOW - Your newsletter on CoFoE - ISSUE Nº 11

ITALY AND FRANCE SIGN QUIRINALE TREATY TO STRENGTHEN COOPERATION, A BIG STEP TOWARDS A FEDERAL EUROPE 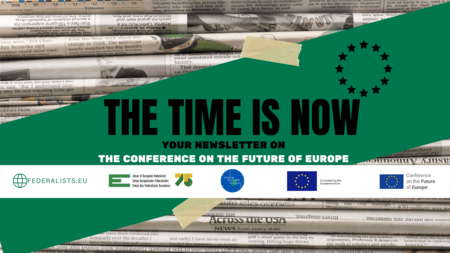 "The past year’s crisis underscored the need for a more united Europe. We must seize this opportunity to make the Conference on the Future of Europe a true forum with citizens to work together to achieve a more sovereign and democratic Europe."

Quirinale Palace, 26/11/2021 - Italian Prime Minister Mario DRAGHI and French President Emmanuel MACRON sign the "Treaty between the Italy and the France for enhanced bilateral cooperation" at the Quirinale Palace, in the presence of President MATTARELLA.

UEF President and MEP Sandro GOZI, who attended the signing of the Quirinal Treaty as part of Emmanuel Macron’s French delegation said “This treaty is even more strategic at this moment, with the Conference on the Future of Europe underway, the upcoming French presidency of the Council of the EU and the debate on the eurozone. The French-Italian Treaty and the German Coalition Agreement are both very good news for Europe.”

In future, Italy and France will cooperate more intensively in the fields of diplomacy and defence, digital and environment, culture and education, science and industry, and space. The Treaty also aims to introduce a joint voluntary service for young people. Furthermore, Italy and France intend to coordinate from now on with each other before decisions are made at European level - similar to the long-standing practice between Paris and Berlin. The Italian-French Treaty also stipulates that ministers from both countries will regularly attend meetings of the other government.

The Quirinal Treaty is modelled on, but not intended to replace, the 1963 Elysée Treaty between France and Germany and the addition it received in 2019 through the Treaty of Aachen. French President Macron stressed that the Quirinal Treaty is not a competitor for French relations with Germany. It rather aims to strengthen Europe as a whole.

UEF President and MEP Sandro GOZI said "I am convinced that the European unification process with 27 Member States must rest on a solid political, industrial and geopolitical foundation, on a tripod of Rome, Paris and Berlin. This does not mean creating new divisions between countries but, on the contrary, fostering a dynamic group of countries and peoples working resolutely and comprehensively to ensure that all the common goals decided by the 27 are actually achieved."

The initiative for this Treaty came from French President Emmanuel Macron already in September 2017, who presented the idea for this treaty during the Franco-Italian summit in Lyon. Negotiations were taken up in early 2018 chaired by the Undersecretary for European Affairs in the Gentiloni government, Sandro Gozi, and the French Minister for European Affairs Nathalie Loiseau. The drafting of the project had been entrusted to a group of six "wise men". However, negotiations came to a standstill in 2018 when the government of Lega and the Five Star Movement took office in Rome and clashed repeatedly with Macron over the issue of immigration and sympathy for the Yellow Vests protests, among other things. After Draghi took office in Rome in February, the negotiations on the bilateral cooperation agreement got moving again. In many bilateral meetings between Draghi and Macron since then, open questions of detail were negotiated.

Further information on the Quirinale Treaty:

2. A BIG STEP TOWARDS A FEDERAL EUROPE

With the title "Dare to make more Progress - Alliance for freedom, justice and sustainability", the representatives of the Sozial Demokratische Partei Deutschlands (SPD), BÜNDNIS 90/DIE GRÜNEN and Freien Demokraten (FDP) presented their Coalition Treaty on 24 November 2021, after around a month of negotiations. The 178-page Treaty is intended to form the basis for cooperation between the three parties, which want to build the federal government for the next four years.

The seventh of a total of 9 chapters deals with "Germany's responsibility for Europe and the world." German interests should be defined in the light of European interests, according to the three parties.

One of the most ambitious goals of the so-called "traffic light coalition" is the further development of the EU in crucial areas: for example, the CoFoE should lead to a constitutional convention and to a further development into a European Federation, organized decentrally also according to the principles of subsidiarity and proportionality and based on the Charter of Fundamental Rights.

Following the first round of sessions that took place in the European Parliament in Strasbourg in September and October, the European Citizens’ Panels continued their work in putting forward citizens’ priorities and recommendations.

Around 800 randomly selected European citizens met virtually during November to discuss issues in the second session of the citizen’s panels of the CoFoE.

The meeting, which took place during the weekend, takes up the different debates that began almost two months ago, and aims to make concrete recommendations along five different thematic axes on each thematic panel.

The recommendations of the citizens on this panels will be finalised and adopted at the third and final round of deliberations over the coming weekends, to be discussed in the Conference Plenary in December and January.

4. INTERPARLIAMENTARY COMMITTEE MEETING ON THE CoFoE

A delegation of European youth ambassadors were invited to the European Parliament to present and debate the results of a report that brought together around 10,000 young people from around the EU, who gave their contributions on the future of Europe. Kalojan HOFFMEISTER, of the Young European Federalists, and Niamh MCGOVERN, co-chair of the European youth event were the youth representatives present in the parliament to explain the report.

Federalism and stronger European harmonisation at the heart of European youth delegation presentation on Future of Europe.

Youths supported better fiscal integration in the Union, and a common fiscal policy for a fairer distribution of funds between wealthy and developing countries. and minimise bureaucracy. They expressed a desire to reform the European electoral system. “EU youth want to participate in a truly European democracy, not just 27 national democracies that just so happen to come together every five years.”, said HOFFMEISTER. According to him, youths want transnational electoral lists that would show the structure and members of the political groups across the EU, so citizens have a better idea of who they’re really voting for during the European elections. HOFFMEISTER also said it is the wish of the European youth to abolish the unanimity rule, strengthen the role of the Commission and the EP for dealing with the rule of law, and finally make clear that the ultimate authority on points of law is the European Court of Justice.

6. THIERRY BEAUDET AND CHRISTA SCHWENG: "FOR A EUROPE OF CIVIL SOCIETIES"

To face new global challenges, the time has come for a new deepening, which will involve a Europe of civil societies: trade unions, employers, associations and NGOs.

This is why, one month before the French presidency of the Council of the EU and in the wake of the CoFoE, the French Economic, Social and Environmental Council and the European Economic and Social Committee are organised summit to speak with one voice on the future of Europe, the content of recovery plans, environmental transition, the primacy of European law, trade and cooperation.

In her opening speech, EESC President Christa SCHWENG made clear the Committee's ambitions: to provide civil society with the opportunity to make its voice heard that the Conference alone cannot fully satisfy. The number of people accessing the platform is still low, and citizens are not well informed. The process needs to be speeded up.

In December and January, the Panels will meet in four European academic institutions (in Dublin, Florence, Natolin/Warsaw, and Maastricht) to finalise their recommendations so they can be discussed at the Conference Plenary.

In light of the evolving COVID-19 situation in Ireland and the stricter measures announced there recently, the Co-Chairs of the Conference, having sought advice from partners, have decided to postpone the European Citizens' Panel 1 meeting that was supposed to take place in Dublin on 3-5 December. New dates will be announced in due course, in order to facilitate an engaging and fruitful citizens’ deliberation in an effective manner. The rest of the Conference calendar remains as is. In the meantime, Europeans can continue to share their ideas on how to shape the EU’s future on the Multilingual Digital Platform.

The great expectations some have for the ongoing Conference on the Future of Europe, and the little that is known about it, weigh heavily on it, writes Christian Moos.

It is a pretty safe bet that most Europeans outside the Brussels bubble have never heard of the Conference on the Future of Europe (CoFoE). To those of us who care about a more participatory democratic culture in Europe this is a significant challenge – we need to help make sure the Conference is a success, writes Roger Casale.

National elections just passed in Germany and upcoming elections in France deprive Europe of political leadership. But there is an electoral solution that could solve this problem, writes Matteo Garavoglia.

The past year’s crisis underscored the need for a more united Europe. We must seize this opportunity to make the Conference on the Future of Europe a true forum with citizens to work together to achieve a more sovereign and democratic Europe, says UEF President and Renew MEP Sandro Gozi.

Despite participants’ fears that the Conference on the Future of Europe (CoFoE) is not making headlines and therefore might not be as impactful as hoped, a European Parliament spokesperson has reassured them that the media is listening and their voices will be heard.

The Conference on the future of Europe is faltering, but EU institutions and member states can still save it. And they should, as it could be a key tool to re-engage the citizens, writes Nicoletta Pirozzi, head of programme on European Union and institutional relations manager at the Istituto Affari Internazionali (IAI).

The Conference on the Future of Europe is underway but there is a great risk that it will turn out to be a lost opportunity. This is due mainly to the inaction of “pro-European” governments and parties and the European institutions, writes Roberto Castaldi.

Organisers of the Conference on the Future of Europe (CoFoE) are “encouraged by the number of visits to the platform and endorsements”, a spokesperson for the conference told EURACTIV. This comes following concerns from some participants that the event was not getting enough attention.

One important issue that the Conference on the Future of Europe needs to deal with is the relationship of the EU with the rest of the world. For me, that ‘rest of the world’ begins a few kilometres from my home in Sligo – the border that the British imposed in Ireland a hundred years ago, says Irish MEP, Chris MacManus.

Europeans must mobilise in demanding a better EU as part of the Conference on the Future of Europe (CoFoE). However, a more united and democratic Union is not in everyone’s interest, and some political actors are consistently striving to make the consultation process meaningless. In response to this, we must make the Conference too big to ignore.

The Conference for the Future of Europe is well underway. Still, concerns have been raised from the get-go that citizens’ proposals might not be taken seriously or implemented fully by European lawmakers for various reasons. But there is still time to turn things around and for institutions to demonstrate they are listening to citizens, said Jonathan Moskovic in an interview with EURACTIV. Jonathan Moskovic is the democratic innovation advisor to the president of the French-speaking Brussels parliament, Magali Plovie.