The Union of European Federalists, in collaboration with the European Parliament's Intergroup The Spinelli Group, is delighted to invite you to an Evening Debate on European sovereignty.

The very concept of sovereignty has become problematic in an interdependent world where many issues are beyond the control of states. Therefore, the question of where sovereignty rests and how to guarantee it to citizens is intertwined with the European project.

States show to be unable to act effectively in many fields of public life. Their desire to maintain exclusive control of sovereignty at the national level has become obsolete and contradictory. It becomes even clearer as the idea of empires re-emerges on the world stage and considering the attempts against democracy in the Western countries, as recent American and European political events show.

How can Europe ensure that its citizens can “take back control” over their destiny and the governance of major issues? What is the federalist approach to sovereignty? Can new European Treaties change the way sovereignty is shared? Ultimately, where does European sovereignty lie?

To answer these questions, we invited:

Please register to this event: https://docs.google.com/forms/d/e/1FAIpQLSfSVxST3dRcIJS3tEuaD0V0m5raVy18TFPP1Lz-tQmSFlPreQ/viewform

Here you can listen the event

After introductory words, the event continues with a lively debate between our panelists about european democracy and sovereignity. @SpinelliGroup @federalists pic.twitter.com/V33gEECZpE 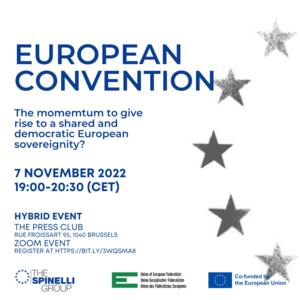