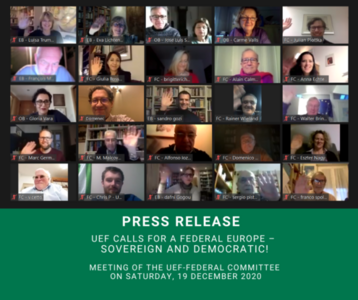 The past year has been an unprecedented one in various aspects of the political,  democratic, economic, and social European spheres. And there is no doubt that Federalism is more necessary than ever today.

All the issues above were raised in our Federal Committee meeting held online on Saturday, 19 December. In his political introduction, UEF President Sandro Gozi, who shares the same concerns and sorrows as all European citizens, stated that “We are living a Darwinian moment in Europe, and that helps us better promote Europe. UEF has to exploit this occasion to change the public opinion and mobilise citizens to reform the European Union.” Moreover, The FC meeting agenda included votes on several topics and the election of a new Vice-President of UEF.

The first topic related to our political and advocacy work was the Future of Europe in our resolution and subsequent appeal, to be signed by politicians and personalities at all levels, on a more Federal, Sovereign, and Democratic Europe in view of the Conference on the Future of Europe. The second resolution was in support of key elements of the European Parliament report on the Stocktaking of the European elections. In addition, a positive vote on the resolution Strengthening Civil Society participation at UN level - support world citizens' initiative was carried upon.

As mentioned earlier, the election of a new member of the Executive Bureau formally took place. MEP & FC member Domènec Ruiz Devesa was appointed as Vice-President with an absolute majority. On Domenèc’s vote, President Gozi expressed the following: “I welcome Domenèc, and thank all of those who cast their votes and trust in him.” Ruiz Devesa, an active member of UEF since 2013, believes that UEF has to be ambitious, at the vanguard of all the pro-European organisations. As Vice-President, he would like to strengthen the connection between UEF and policy-makers and to promote an efficient influence on the media in a crucial moment for Europe with the launch of the Recovery Plan and the Conference on the Future of Europe. He’s also committed to topics such as migration and global governance.

Furthermore, The FC members warmly welcomed the official constitution of our national section in Greece. We take the opportunity again to congratulate the newly-elected Greek Executive Bureau on December 11! We are looking forward to working with President George Kolyvas, Secretary-General Venetia Cousa, and all the members of the EB, of which UEF-EB member Daphne Gogou is also part. Read their press release here.

The FC meeting was also an excellent opportunity to have a look back at the federalist debates, activities, projects, and initiatives organised this year. The Covid-19 pandemic did certainly not stop our federalist movement this year and will not prevent us from advocating for a more federal Europe in 2021. Therefore, the working programme of UEF for next year was also presented by Secretary-General Anna Echterhoff and Treasurer François Mennerat, who happily stressed the importance of 2021 for UEF as it marks the 75th anniversary of our organisation. You can check out our logo for next year here. Do not hesitate to use it as of January 1, 2021!

Last but not least, FC members and observers had the pleasure to attend a roundtable on our role as federalists in the Conference on the Future of Europe. The debate was introduced  by Prof. Giulia Rossolillo, Chairwoman of PC1 “Institutions and Future of Europe”, and counted with the interventions of several MEPs, who are also members of UEF, such as our President Sandro Gozi, Spinelli Group President Brando Benifei, European Parliament Vice-President and European Union Deutschland President Rainer Wieland and newly-elected UEF Vice-President Domènec Ruiz Devesa. All speakers expressed the urgency to call for the launch of the Conference of the Future of Europe as soon as possible.

“I really think and hope we can start a very challenging year in a very solid and cohesive way. This Federal Committee meeting was a very frank exchange that will serve to strengthen our organisation. You can count on me that I will accompany this organisation until the very end”, stated UEF President Sandro Gozi in his concluding remarks.

Europe won't be the same after this pandemic, nor will be their citizens or political institutions. More than ever, we are working and striving for a more progressive, equal, united, and federal Europe.