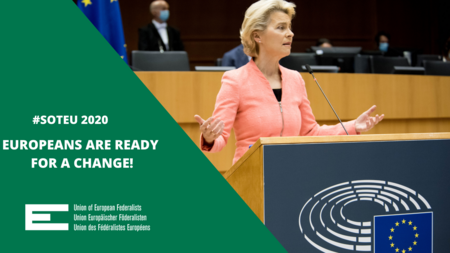 Member of the European Parliament, Gozi, quotes Gandhi: "We are the changes we want to see in the world".

"Excellent, Ursula von der Leyen, mission accomplished: we Europeans are ready for change, our reaction as the European Union to the crisis caused by the Coronavirus shows that mutual trust and shared sovereignty are the only real way to the common good. Now is the time to move forward: let us launch the Conference on the future of Europe and make this change happen without taboos" - Sandro Gozi, President of the Union of European Federalists, comments on the first speech by the President of the European Commission, Ursula von der Leyen, on the State of the Union.

"We must guarantee - Gozi continues – protection for all European citizens from economic, health and social risks; continue on the path of ecological and digital transformation; defend our vital interests, our values and the fundamental principles on which our community is based on, first and foremost against rival countries such as China. We must also strengthen transnational democracy, of which the EU is in need today more than ever to counter the internal and external enemies and achieve its own ambitions".

"If the Commission keeps its promises” - he concludes - "it will always find us at its side to accomplish all these goals together. Gandhi teaching is valid for us Europeans, today more than ever: we must be the change we want to see in the world".

The Union of European Federalists (UEF) is a pan-European, non-governmental political organisation dedicated to the promotion of European political unity. For more than 70 years UEF has been a leading voice in the promotion of European unity and an early campaigner for key milestones in the development of the European Communities and then the European Union. With 25 national sections and over 400 local groups across Europe, UEF promotes a federal Europe among citizens and political representatives at all levels of government. More on: www.federalists.eu