In the paper, some eminent experts of the Movimento Federalista Europeo (MFE), the Italian section of the Union of European Federalists, outline a series of reforms of the EU institutional architecture, which might streamline and democratise the functioning to the Union. 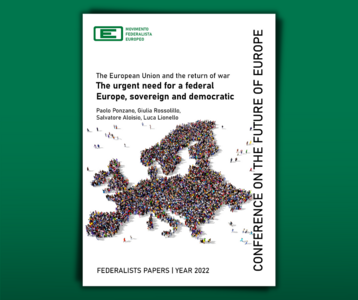 Sandro Gozi, European Parliament member and Union of European Federalists President, has sent to the Constitutional Affairs Committee (AFCO) and of the The Spinelli Group the last issue of the series Federalist papers “The European Union and the return of war. The Urgent need for a federal Europe, Sovereign and Democratic” with the introduction of Sandro Gozi itself.

Here the paper in PDF

In the paper, some eminent experts of the Movimento Federalista Europeo (MFE), the Italian section of the Union of European Federalists, outline a series of reforms of the EU institutional architecture, which might streamline and democratise the functioning to the Union.

For instance, it is proposed:

We public here the introduction written from Sandro Gozi

"European unity, as we have known it since 1951, was built on the ashes of the Second World War, the most devastating conflict in the history of humankind. Now, eighty years on, war has returned to our continent, and it is drawing increasingly and dangerously close to the borders of the European Union. However, Putin’s attempt to exploit the divisions between the twenty-seven member states has failed, and indeed only reinforced the sense of belonging and unity that had already emerged during the pandemic. While pro-European forces certainly cannot but draw satisfaction from the emergence of this new “geopolitical” Union, the unprecedented political cohesion we are witnessing today must not result in political immobility, or short-sighted acceptance of the way the Treaties, in their current form, are limiting the scope for affirmation of a truly transnational political system. Rather, the EU’s current capacity for action, limited by the competences attributed to it, as well as by the fact that unanimity is still required in numerous areas, should drive us to demand, more insistently than ever, a sovereign and democratic Europe. It is, above all, crucial to overcome the idea that the single twenty-seven nations have a monopoly on democracy, and that this can be exercised solely within their own borders.

The very survival of Europe’s nation-states, now incapable of guaranteeing their own vital interests in the face of a world made of “empires”, from Russia to China, hinges on the success of this transnational project. The main challenges faced by the world every day, such as climate change, the digital transition, and the safeguarding of multilateralism, are indeed transnational issues and, as such, cannot be addressed through unilateral actions by the single nation-states, whose influence has declined dramatically. At the same time, the attribution of new competences to the EU must necessarily be accompanied by the creation of a genuine European political space, to be achieved through the progressive affirmation of transnational political and civic subjects as the main protagonists of truly European elections and debate.

Today, the EU cannot yet call itself fully democratic, or a power, or less still sovereign. This was, in fact, one of the main conclusions of the Conference on the Future of Europe, which saw participating citizens calling upon European and national politics to make the EU more social, greener, and above all more democratic and attentive to the demands of its citizens. Such an appeal cannot and must not go unheeded. The European Parliament, abiding by its commitment, immediately approved the reform of electoral law that introduces transnational lists, and voted to trigger Article 48 of the Treaty on European Union, thereby initiating the procedure for amending the Treaties, asking the European Council to convene, at the earliest opportunity, a Convention for this purpose. I think the ideas and proposals set out in this “federalist paper” can contribute in a concrete and constructive way to the democratisation of the EU in the context of this imminent process of European reform.

Deeming it now indispensable, we want a federal, sovereign and democratic Europe, aimed at defending the values and principles of peace, multilateralism and cooperation between free and sovereign countries, as well as national and local values, interests and identities; and ready to act as a power on the global stage to more effectively manage the problems and challenges which the nation-states have lost the ability to control."