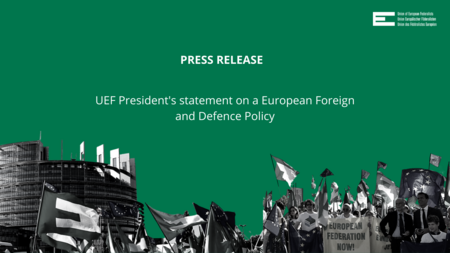 After the sudden withdrawal of the United States from Afghanistan that calls into question its ability to assure the European defence, and that further increases instability on the EU's borders and accentuates the need for Europe to assume responsibility for its own security. Following the recent meeting between Mario Draghi, President of the Council of the Italian Republic, and Emmanuel Macron, President of the French Republic, after which France and Italy have expressed their intention to promote an initiative to overcome the right of veto in the European defence sector.

The President of the Union of European Federalists and Member of the European Parliament, Sandro GOZI, urges for a determined improvement of the EU foreign, security and defence policy.

The intergovernmental method prevailing within the EU can’t produce a European defence and prevents any democratic control of a European force. Consequently, Sandro GOZI asks for qualified majority voting in foreign policy to be put on the EU agenda as soon as possible, as requested by the Meseberg declaration.

If there is no agreement at 27, the available countries should go ahead with the procedure of enhanced co-operation, open to the member States that want to join later. Accordingly, until defence eventually becomes a common policy of a Federal European Union, the European Council, in the format of the countries available for an enhanced co-operation on foreign policy, should meet as a European Security Council.

In order to enable the EU to perform the so-called Petersberg missions, the EU needs to establish a permanent military operational headquarters for planning, command and control of European missions. Moreover, UEF President calls for the establishment, in case an enhanced cooperation prevails, of a European intervention force in addition to the national armies or, as an alternative, the integration, in EU treaties, of the Eurocorps, putting it under the control of the European Parliament and of the EU military committee (EUMC). In this regard, the European Defence Fund - to be truly instrumental - needs a substantially increased budget through a EU own resource.

Sandro GOZI invites the Conference on the future of Europe to include the conclusions of the Strategic compass to be approved in the spring of next year, in the conclusions of the Conference, in order that the French presidency of the European semester takes the initiative to establish the European “first entry force” as proposed by 14 European member States and supported by the High Representative of the Union for Foreign Affairs and Security Policy, Josep Borrell, to provide, if necessary, Treaty changes allowing qualified majority voting on foreign affairs and defence in the Council and allowing for the introduction of a European “first entry force”, controlled by the European Parliament and the Council.