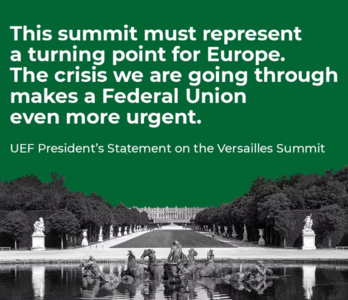 Exceptional times call for exceptional measures. The rogue war waged by Putin against Ukraine and its people and against European values and principles is approaching our borders, and we cannot settle down once again for watered down solutions to one of the most defining moments in our common history. No time to hesitate.

The current budget cannot cover a concrete and credible effort in support of Ukraine. The three institutions must live up to their promises to ensure the survival of a free Ukraine, which is not only fighting for itself. It's fighting on behalf of the free world for rule of law and democracy.

This is why we call now for a new Recovery Plan to be financed with eurobonds for our defence and energetic autonomy to put an end to our strategic weakness and our dependence on Russian gas. And We must mutualise the costs deriving from the necessary sanctions against Putin’s regime . Then, we should not be afraid to state the obvious: the Ukrainian people must choose its own destiny and deserves a future in our Union.

The reaction carried out by the EU during the crisis has been unprecedented,but still not ambitious enough. We should push our action beyond. What's at stake today is not only the geopolitical balance of the continent, but our very survival. We need to strengthen European autonomy in the field of defence, to activate common defence clauses as foreseen in the Treaty and constitute a EU rapid reaction force and common armament programs. We must ensure that each euro spent in defence can really contribute to our common security: more efficiency means more credibility and power.

We need a sovereign and Democratic European federation able to defend its values and the principles of peace, multilateralism and cooperation between free and sovereign countries. But also ready to act strongly when strong action is needed. This summit must be a turning point and must be followed by a constitutional reform process at the end and as a follow-up of the Conference on the future of Europe. The crisis we are going through requires us to be more united than ever.