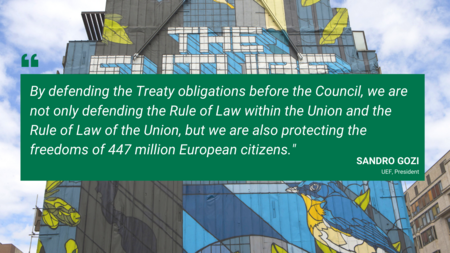 "I don't know whether there is a vaccine or antidote for populism and nationalism, but I am convinced that democracy and the Rule of Law are as vital as the air we breathe—and there is a democratic emergency within our Union. In situations of emergency, measures are needed. Therefore, we call for immediate implementation of the regulation on the Rule of Law", UEF President Sandro Gozi says. "This is an unprecedented step forward and, as federalists, one of our main goals to be achieved. The EU member states must implement the Treaties, the European law, and that the EU institutions have to ensure that EU Member states fulfil their obligations without postponements, without suspensions, without further intentions or guidelines".

"We must put an end to the unanimous decisions and the threats of veto. This is only one more reason to start the Conference on the future of Europe as soon as possible," UEF  President Sandro Gozi concluded earlier today.