Due to unfair Chinese trade practices, the oppression of the Uyghurs and the escalating Taiwan conflict a.o., EU-China relations have already deteriorated significantly in recent years. What kind of approach is now needed with China? How can we reverse the close economic ties with China? How should the EU react to the fact that China has increased energy imports from Russia since the beginning of the Russian war of aggression in Ukraine? On Thursday, 30 June 2022, more than 50 interested participants discussed these topics in a workshop and a subsequent youth dialogue. 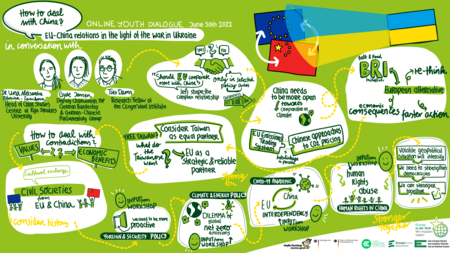 Already at 4:00 p.m., almost 20 interested young people from Taiwan, Malaysia, the United Kingdom, Spain, Germany and more countries dedicated themselves to EU-China relations in a one-hour workshop. After a short introduction, the participants discussed the future of EU-China relations in four parallel breakout sessions on foreign and security policy, climate and energy policy, COVID-19 pandemic as well as China's human rights situation. In the small group on foreign and security Policy, concern was expressed about the Russian-Chinese alliance against the EU, although China is currently mostly taking advantage of Russia economically. The hope was also expressed that a joint EU answer to the Russian invasion of Ukraine may in the long run strengthen European cohesion, which would weaken China's role in the region. On the topic of climate and energy policy, participants questioned China's goal to be climate neutral by 2060, while the breakout session on the COVID-19 pandemic was dominated by the impact of the Zero-COVID strategy on the Chinese economy. On the topic of China's human rights situation, participants focused on the extent to which the EU holds China accountable for human rights violations against the Uyghurs.

Well prepared with numerous questions and ideas, most of the workshop participants also took part in the online youth dialogue starting at 6:00 p.m. With Dr Una Aleksandra Bērziņa-Čerenkova, Head of China Studies Centre at Riga Stradins University, Ties Dams, Research Fellow at the Clingendael Institute, and Gyde Jensen, Deputy Chairwoman of the FDP Parliamentary Group in the German Bundestag and Deputy Chairwoman of the German-Chinese Parliamentary Group, three renowned experts participated in the youth dialogue. A brief survey of the participants at the beginning of the youth dialogue revealed a strong preference for closer cooperation with China, at least in selected policy areas. Based on this, the exchange with the three panellists was characterised by topics such as the Belt and Road Initiative, a closer cooperation in the field of climate policy and the European position on the political status of Taiwan.

Concluding the youth dialogue, the three panellists referred to the ideas and questions of the workshop participants. While Gyde Jensen pointed out that the EU was already reactive and outspoken on China's human rights violations against the Uyghurs and, among other things, had put the already negotiated investment agreement with China on ice, Ties Dams made it clear that China's ambitious goal of climate neutrality in 2060 was not very credible so far. Dr Una Aleksandra Bērziņa-Čerenkova summarised that EU-China relations can be described as an interdependent relationship between two actors. It is not only the EU that is dependent on China. China is also dependent and is trying to present itself as a neutral actor in the wake of Russia's war of aggression in Ukraine in order to avoid painful sanctions that could further weaken its already stumbling economy.

Our media partner, the online youth magazine "treffpunkteuropa.de", reports on its website in German about the online youth dialogue "How to deal with China? EU-China relations in the light of the war in Ukraine" of 30 June 2022. Read the full article here.

A broad and open dialogue is important to us, which is why we are working with a wide range of partners from politics and civil society. The event is part of the citizens' dialogue project "Europe in the World - We need to talk!" and was organised in cooperation with the Young European Federalists (JEF) Germany and the Union of European Federalists (UEF), funded by the German Federal Foreign Office and supported by the Press and Information Office of the Federal Government. Further information on our nationwide (online) citizens' dialogue series "Europe - We need to talk!" can be found in German here.